How we lost 54k GitHub stars – HTTPie blog.
What we learned from losing a decade of stargazers and watchers. Aka the biggest accidental community loss in open source history.

What we learned from losing a decade of stargazers and watchers. Aka the biggest accidental community loss in open source history.

They didn’t “lose” anything. The guy just slept through a series of important prompts and stubbornly banged on the keyboard in the manner of “I KNOW WHAT I AM DOING DAMN IT!” when he, in fact, didn’t know what he was doing.

He admits it himself in the article: he thought he was changing the settings of another repo. Well, sucks to be him but it’s not very hard to pay half-attention to these things.

I have to agree with the developer that UI/UX of Github is far from optimal on this regard.

They even give an awesome example on how they deal with this type of destructive actions on their own app: 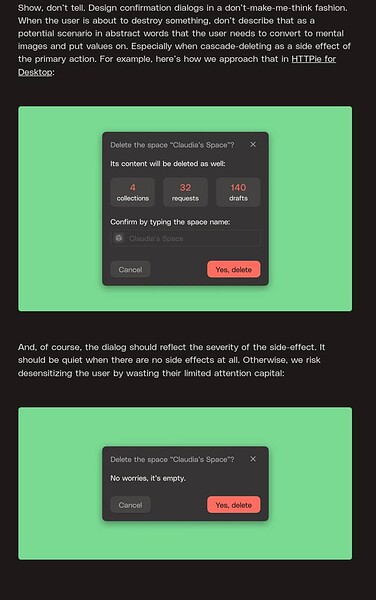 For me this is awesome way of dealing with a destructive action.

So, from this I learned an awesome way to do it on my app

Oh, absolutely. I agree GitHub could make it more obvious. But such destructive actions still warrant you to do double-check; at least that’s what I do.

And to me GitHub became a bit lazy ever since Microsoft bought them.

And to me GitHub became a bit lazy ever since Microsoft bought them.

I think it’s because they don’t worry about funding now. Often that stress can be very good to make a good product that people want.

True. Fear of competition and survival is what keeps companies honest. When that disappears, they become slow, complacent and lazy.

Which describes Microsoft’s culture. Facebook has the culture of make lots of changes fast, which does keep it moving forward, but it also causes a lot of breakages the way they do it too, lol. There’s some good middle ground no doubt.

Good for someone but probably not for most of us. I think a huge amount of these two different cultures can be understood by the markets they operate in as their primary means of growth. If your main objective is to consume enterprise level and let it trickle down then you need to deal with dinosaurs that are scared of things moving faster than a snail you go about things one way, if you are competing for attention in an ADHD landscape you go another. In both cases they don’t exist to build great products that people buy on their merits, they exist to conquer the space in which they operate systematically (they are not the only ones, Apple, Google, Amazon, whatever). I don’t see how a good middle ground can be found here for the rest of us… the companies absorbed don’t become lazy or reckless, they have new objectives and strategies instead of making good products to survive.

I feel sorry for them!

I’d go for GitLab after this kind of move.

I don’t think gitlab has that kind of easy to access backup system either though, so it would be more of trying to convince them (perhaps with money) to manually do it as well.

Sure.
It was more aimed at Github’s “controversial actions”.

so it would be more of trying to convince them (perhaps with money) to manually do it as well.

They have proposed money to Github.

#Lesson 4 could have been to self host a Gitlab instance.

I can’t bear Github anymore since “Copilot”. It was the final nail in the coffin IMHO.

They have proposed money to Github.

Not enough for github to care, that’s the issue. Lol.