Hamler is a strongly-typed language with compile-time typechecking and built-in support for concurrency and distribution.

Hamler empowers industries to build the next generation of scalable, reliable, realtime applications, especially for 5G, IoT and edge computing.

For almost a decade, we have been developing software systems based on Erlang/OTP, especially our main product EMQ X - the scalable open-source MQTT broker. So, we have always believed that Erlang is a masterpiece of engineering. With amazing concurrency, distribution and fault tolerance, it is one of the few general-purpose language platforms able to properly handle concurrency and soft realtime.

However, from all the experience writing Erlang, we believe that the following features can help Erlang programmer better adapt to the coming wave of 5G, IoT and edge-programming and attract more people for using BEAM.

Now all the features are avaliable in the Hamler programming language.

The Hamler source code is parsed to generate CST, then CoreErlang’s IR is generated after CST -> AST -> CoreFn’s syntax tree transformation, syntax analysis and type checking. The code is then used by the Erlang compiler to generate the final Beam bytecode.

The Hamler compiler architecture is shown below: 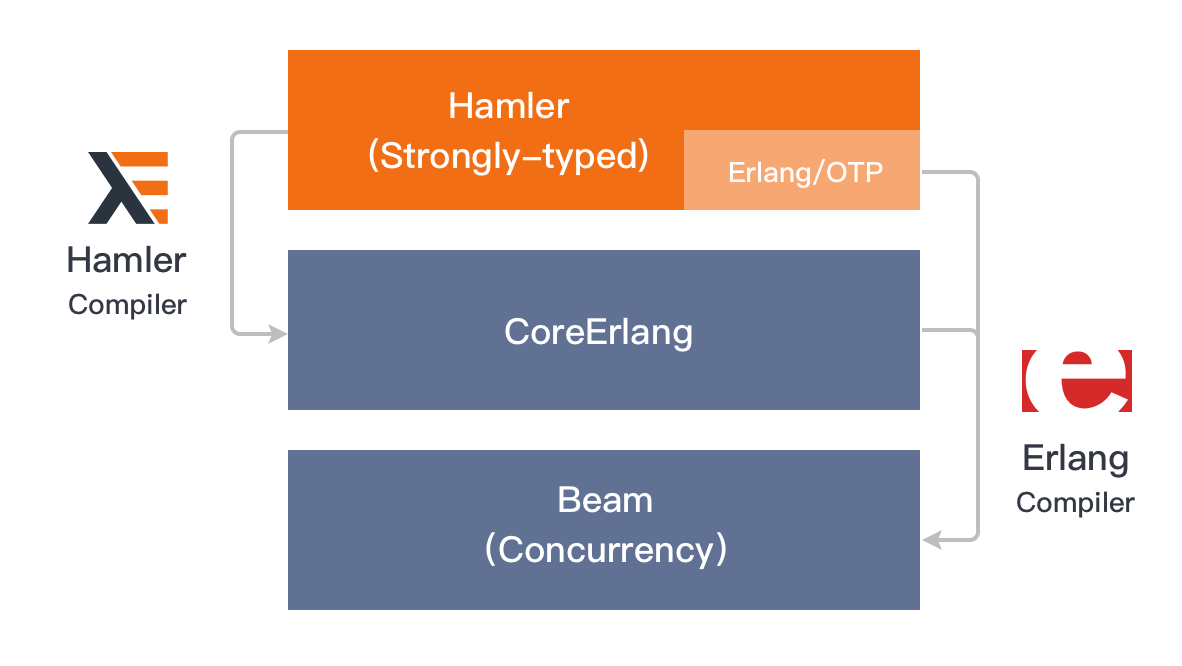 The Hamler 0.1 compiler was initially attempted to be implemented based on the GHC 8.10.1, but was later changed to adapt from Purescript Compiler 0.13.6’s

How does Hamler compare to Haskell, PureScript and e.g. Gleam?

It is currently based on the PureScript compiler. Does this mean that its syntax/semantics are (essentially) the same as PureScript (with changes in what is available in the standard library to e.g. support the BEAM VM’s features)? Or something else entirely?

How do Hamler datatypes compile down to Erlang’s built-in datatypes, and how easy is it to communicate (using e.g. a foreign-function-interface) with pre-existing Erlang/Elixir/etc. code?

From reading the compiler’s source code it seems the only new thing is the Erlang generation, so I would suggest this PureScript with a different name rather than a new language. Perhaps more changes are to come later.