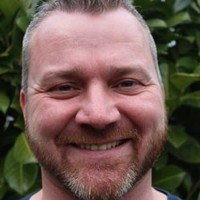 When you’re focused on your goals and you keep your eyes open for opportunities, things often just fall into place naturally. What may look like luck from the outside, is actually the result of hard work and knowing when to take a risk.

Discover how PragProg author Maik Schmidt navigated events to propel himself and his career forward. See what’s possible to realize your own dreams. 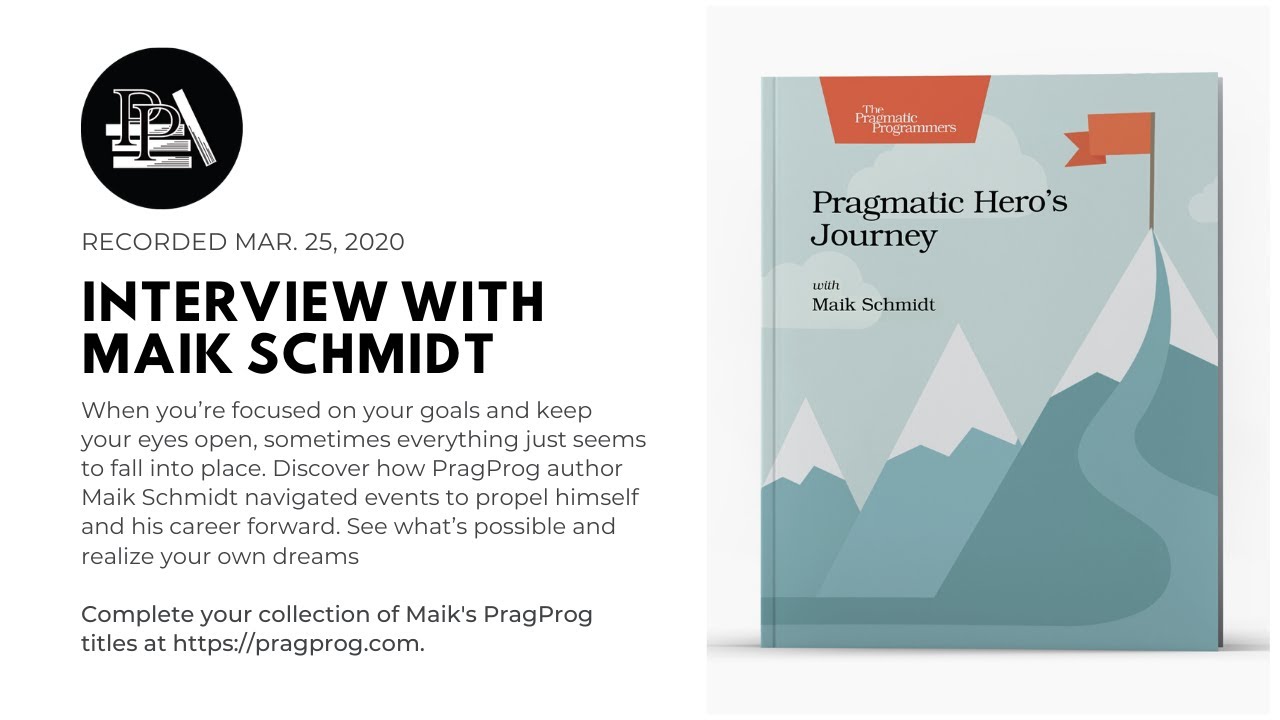 We’re giving away one of Maik’s books to one lucky winner! Simply post a comment or a question in his AMA below, and the Devtalk bot will randomly pick a winner at a time of the author’s choosing … then automatically update this thread with the results!

For those who prefer to read rather than listen, following are highlights from the interview.

If you believe in fate, you might just say that it was Maik’s destiny to write with PragProg.

Long before he was authoring books, Maik was buying them…lots of them. So when he learned that you could get paid and get free books by writing book reviews for magazines, he decided to give it a shot.

As luck would have it, one of Maik’s earliest reviews was for the Pragmatic Starter Kit, Volumes 1 and 2. Maik wrote his review, got paid, and got his free books. Then he got hooked.

Even after writing three- to four-page articles for a while, Maik still wasn’t thinking about writing books. That’s when fate struck again.

An American company based in Dallas, Texas, bought the company Maik was working for in Germany. And when he was asked to travel to the corporate headquarters for a meeting, his first thought was, “That’s where Dave Thomas lives!”

After getting settled into his hotel room, Maik wrote Dave an email introducing himself. Within an hour Dave wrote back and invited Maik to go to a local tech meetup with him the following day. In Maik’s own words, “It was such a great day!”

During their time together, Dave asked Maik whether he’d consider writing a book about Ruby for the Pragmatic Bookshelf. Maik flew home, thought it over, and decided, “Why not?”

And, one proposal and several revisions later, Maik had a contract to write his very first book, Enterprise Integration with Ruby.

Maik is one of those rare authors who say they’ve never experienced writer’s block. For Maik, there’s not a lot of difference between writing prose, textbooks, and code. As he says, “It all requires a certain mindset, some flow…and some discipline.”

Maik also points out that a book’s subject matter itself can present some unique obstacles.

Interestingly, as a non-native English speaker, you might assume that the language barrier is Maik’s biggest hurdle. However, he thinks it’s an advantage that helps him write more clearly. “I don’t even have a chance in many cases to come up with something that is complicated, because it’s not my native language,” he explains.

As for Maik’s advice to other authors considering writing a book in a foreign language, he simply says, “Don’t be afraid. If you have something to say…you’ll be able to say it.” Plus, Maik says the rewards are well worth the effort.

According to Maik, being a published author means invitations to attend conferences and give keynotes as well as beneficial content for your CV. But the most rewarding things for Maik are all the positive feedback and helping people “avoid the pain of learning by themselves."

Maik is a software developer and architect, a public speaker, and an author, and he says that writing is what helps him do it all better.

“Writing helps me to think clearly about a lot of the stuff that I’m working with on a day-to-day basis,” Maik explains. “It also helps me to find new ideas because of the research that you automatically do when writing about a topic.”

Or, put another way, Maik says that writing helps you see the negative space around a topic to uncover what it is that you don’t know.

We’re extremely proud to count Maik as one of our authors and friends, and we’re flattered that he calls our publishing process and tools a “developer’s dream.” But, we’re truly moved by what he says about the people here.
“Every editor I’ve worked with [at PragProg] was awesome personally, and they were all also on a very high professional level…I would have had to have spent hundreds of thousands of dollars in writing courses to get what I got from them.”

Now that you know his story, complete your collection of Maik’s PragProg titles today! Don’t forget you can get 35% off with the coupon code devtalk.com!

Connect on Linkedin at https://www.linkedin.com/in/maik-schmidt-/.

We’re now opening up the thread for your questions! Ask Maik anything! Please keep it clean and don’t forget by participating you automatically enter the competition to win one of Maik’s eBooks!

Howdy @maik! I enjoyed listening to your interview. The phrase about helping readers avoid the pain of learning something new on their own really stuck with me. So many times when I do something new, I don’t get good at it until the project is nearly done, and that would change if I had someone who’s been there, done that to learn from!

Thank you very much! Preventing readers from doing unnecessary mistakes and helping them to stay on the right track is still very important to me. It was especially important when I wrote about electronics, because you can quickly damage things beyond repair.

I did not know a lot about electronics when I started the Arduino book, and I can still smell all the many parts that I’ve destroyed. Back then I wished someone had told me what to look for…

I was wondering what you felt were the most fun projects you’ve created with both the Pi and Arduino, and which of the two you would recommend for beginners?

From my understanding the Aduinio is much more of a simple microcontroller (so for very simple tasks) whereas the Pi is more of a mini-computer - so I’m curious to learn what sort of things you’ve used each for, which one you feel is more fun, and, if cost wasn’t an issue, would you recommend the Pi every time since it can be used to do more?

Props also to @Dave, he is such a fantastic host keeping the conversation flowing very naturally while making it fun to listen to!

It is difficult to compare the Arduino to the Raspberry Pi, because they are two completely different devices.

The Arduino - I am talking about the Arduino Uno here - is a microcontroller board that is not very powerful. Compared to more modern microcontrollers it has a tiny amount of memory and its CPU is very slow. It also does not have any fancy features such as WiFi or Bluetooth. At least it supports UART, I2C, and SPI. So, why is it so succesful?

One of the main reasons is its ecosystem. The software to program the Arduino is very simple and targeted at beginners. You can find a huge amount of information about how to connect the Arduino to any electronics part you can imagine. Also, you can find high-quality libraries for accessing nearly every sensor on the market. On top of all that the Arduino operates with 5V and has resistors in the right places that makes it a bit more difficult to brick it.

If you want to get into electronics there is no better option than the Arduino, I think.

Still, if you want to learn programming there is no better option than the Raspberry Pi, I think.

The most fun project I did with the Arduino Uno was turning it into a video game console. I’ve connected it to a joystick shield and a small OLED display. Then I’ve programmed a small space shooting game. The code is still available on Github (https://github.com/maik/Shootduino) and I’ve written an article about it for the German Make magazine (https://www.heise.de/make/artikel/Shootduino-2840846.html). Someone even published a video of it (https://www.youtube.com/watch?v=_CoYa7gWF9o).

My favorite Raspberry Pi projects are related to video games, too. It is an excellent platform for emulating old video game consoles and I am trying to build a really cool table-top arcade machine.

Thanks for such an in-depth reply @maik

Shootduino looks brilliant and I bet you had a lot of fun creating it!

I am going to think of something I could try using an Arduino for. Something the comes to mind is that I make all my food from scratch and while I enjoy cooking, there have been times when I’ve wished I could automate the process, particularly for things I make often!

Thank you to all of you who participated in our Spotlight AMA!

This is now closed and all of those who commented above have been entered into the draw - meaning we’re now ready to pick a winner!

The process will be initiated when somebody clicks the special link below:

Don’t be shy, we need one of you to help make the magic happen!

Thank you for initiating the draw process…

Entering the following members into the draw…

And the winner is…

Congratulations @almokhtar you are the chosen one!! We’ll be in touch about your prize via PM soon

Thank you everyone who entered, and of course @maik for taking part in our Spotlight - thank you!