If you think there’s nothing more to being an author than writing words, think again. Being an author is about growing a business, and that means skill, determination, partnerships, and brand all play a role.

Find out how award-winning author and series editor, Bruce Tate, has combined technical expertise with an eye for opportunity to build an impressive career that spans nearly three decades. 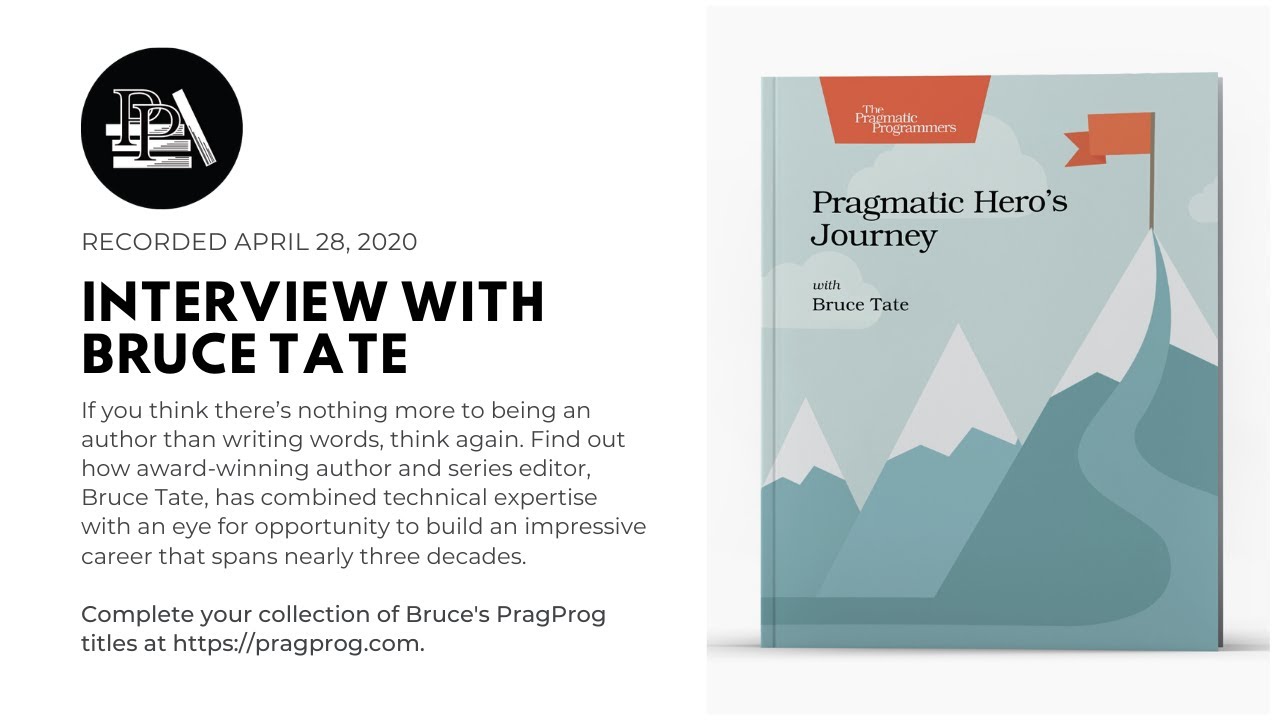 We’re giving away one of Bruce’s books to one lucky winner! Simply post a comment or a question in his AMA below, and the Devtalk bot will randomly pick a winner at a time of the author’s choosing … then automatically update this thread with the results!

For those who prefer to read rather than listen, the following are highlights from the interview.

In the early nineties, Bruce was working on a database project at IBM that spanned both the DB2 database engine behind-the-scenes and the customer-facing components. That’s when Bruce noticed an absence of practical content to help people fine tune this powerful and complex product.

Confident in his abilities to communicate, Bruce seized on a low risk opportunity to be an author by way of an internal group at IBM, IBM Mechanicsburg.

Bruce knew that so long as a book was published through an actual publisher, the IBM Mechanicsburg group would make the work available to every single employee at IBM. And that was a built-in audience.

Before long, Bruce connected with Van Nostrand Reinhold, wrote, and then published his very first book.

Bruce himself says it “wasn’t a great book,” but with a ready-made audience, the book sold well. More importantly, Bruce discovered that having a network to turn to when you’re writing is extremely important.

From peer reviews and feedback from customers to conversations with the “nerds” who were working on the optimizer, Bruce says that “not knowing tons of people” was okay, because it was all about “knowing the right people” who can give feedback and help further your goals.

For nearly 30 years, Bruce has returned to and refined this formula of idea, timing, brand, and network to grow a significant and impressive body of work.

On the writing process…

When you have over a dozen book titles to your name, you know a thing or two about writing. And while every author has their own preferences and process, Bruce has it boiled down to four essential ingredients:

Self Belief - For Bruce, it all starts with believing in yourself and your capabilities as an author and as a person. Simply put, Bruce says, “you cannot write a book without self belief.” In fact, Bruce sees self belief as the very cornerstone of all career success: “Successful people in their profession aren’t the people with the best grades at the best universities. They’re the people who believe … and love what they do.”

Passion and Joy - Bruce concedes that writing a book is a “massive commitment” and that authors really have to be into what they’re doing to see things through to the end. But Bruce also says that writing a truly great book takes more than just passion and dedication, it takes joy. “The laughter comes through and the passion comes through in the words,” explains Bruce. And that’s what sparks a reader’s own imagination and intellect.

Partners - Whether it’s his publisher, his co-authors, reviewers or friends, Bruce relies heavily on his personal network to produce his best work. That said, Bruce reserves an extremely special place for his editor, Jackie Carter. “As an author,” Bruce says, “she’s my conscience.” What’s more, Bruce believes that every author needs their own Jackie⁠—someone who can pull them aside, point out what isn’t working, and encourage them to do better by reminding them that they’re capable of doing better.

Idea - With everything else in place, Bruce says you have to have the right idea for your book and that it can’t be random. It has to be related to something you really want to know yourself. Whether that idea comes from a problem you’re trying to solve at work or an intellectual itch that you need to scratch, having the right idea as you set out on your journey is essential.

Right from the outset, Bruce recognized that writing books and being an author was also about building a brand. Whether it was seizing on a built-in audience at IBM or naming a book Bitter Java just to make it stand out in the marketplace, Bruce knew that everything he was doing impacted and contributed to his personal brand.

From software developer, consultant, and instructor to author, series editor, and more, Bruce has invested heavily in himself⁠—and his readers, clients, and Groxio customers now get to reap the rewards. But above all else, Bruce hopes that his body of work inspires other people to go out and invest in themselves, too.

Now that you know his story, complete your collection of Bruce’s titles below and then continue the learning by subscribing to Grox.io today!

Dont forget! You can get 35% off one of the following books with the coupon code devtalk.com!

We’re now opening up the thread for your questions! Ask Bruce anything! Please keep it clean and don’t forget by participating you automatically enter the competition to win one of Bruce’s ebooks!

This is a great interview with Bruce! I can’t wait to see his book on LiveView

Also agree with what was said about authors choosing a publisher vs self-publishing. For me personally the professional editing makes all the difference - reading a technical book is no small undertaking, and as a reader, I only want to commit my time to well written books that enable me to pick up the topic easily and without frustration.

I think there are others who have been bitten by self-published titles in the past too. The added benefit of this for authors (especially new authors) is that people are much more likely to buy their book if they are published with a tech publisher because readers are confident that it will be up to a certain standard. I don’t know what the figures are, but I bet those who publish with a tech publisher sell far more books than those who self-publish, and of course there are all the other benefits that Dave and Bruce mentioned in the interview too, such as being more attractive to conference organisers, in consulting, etc.

(Btw my views about this are not new, I first mentioned this almost a decade ago.)

Bruce, thanks for all the material you produce and I’m not sure how far you’re into the LiveView book, but if you could I’d love to see info on how to use LV for things like ‘live’ notifications (a bit like the notifications system we have on the forum here).

Hello readers! We’ll be closing out the spotlight on Bruce Tate @redrapids later today. If you would like to leave a comment for Bruce, you will be entered to win one of his ebooks. Your chances are pretty good, as the contest is limited to those people who comment.

Thank you to all of you who participated in our Spotlight AMA!

This is now closed and all of those who commented above have been entered into the draw - meaning we’re now ready to pick a winner!

The process will be initiated when somebody clicks the special link below:

Don’t be shy, we need one of you to help make the magic happen!

Thank you for initiating the draw process…

Entering the following members into the draw…

And the winner is…

Congratulations @Carter you are the chosen one!! We’ll be in touch about your prize via PM soon

Thank you everyone who entered, and of course @redrapids for taking part in our Spotlight - thank you!