From Objects to Functions (PragProg) 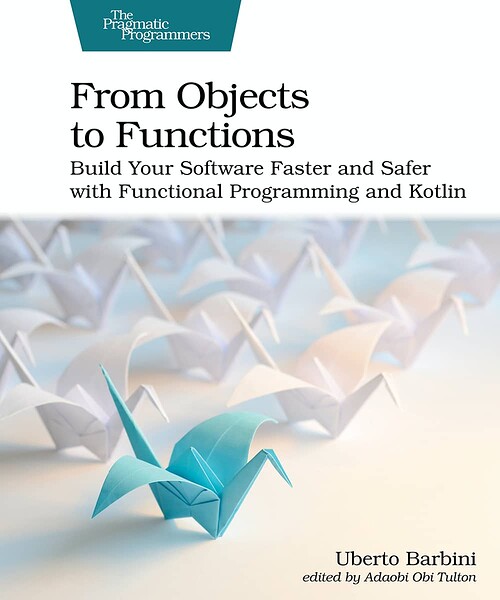 If you’re curious about functional programming or you are struggling with how to put it into practice, this guide will help you increase your productivity composing small functions together instead of creating fat objects.

Switching to the functional paradigm isn’t easy when you’re used to object-oriented programming. You need more than just lambdas and mapping over collections to get a declarative style and disentangle the state from the computations. Use transformations and compositions to help you write less code with better results. Boost your productivity and harness the power of functional programming by creating real-world applications rather than focusing on theoretical concepts.

Work through a series of short exercises to find and compose pure functions, and create data structures that work like algebra. Get rid of mutable state in your software to eliminate the main source of bugs. Apply CQRS and EventSourcing patterns to translate stakeholder requirements into functional design and then into code. See how Kotlin’s easy-to-learn syntax and functional-friendly approach make it a great option for a pragmatic language that integrates well with existing Java code and libraries.

Leverage functional programming to build and deliver robust applications in less time and with fewer defects.

Uberto is a very passionate programmer, starting when he created his first video game on the ZxSpectrum many years ago. He worked in all kinds of organizations, from the very big to the very small, coaching and helping teams build software in an efficient and sustainable way to create value for the company. He has used a range of functional languages (Haskell, Clojure, Scala), and he is currently in love with the simplicity of Kotlin and its productivity. He is a regular speaker at conferences around the world on Kotlin and Java, and he enjoys teaching courses and mentoring young programmers.

I am interested in this book, eventhough I don’t know Kotlin.

if you know Java it shouldn’t be a problem, Kotlin is quite similar and the differences are explained in the book.

Congrats on the release Uberto!

Do you think the book might be useful for people using other functional programming languages too? (I’m thinking Erlang/Elixir specifically) Or do you think it’s mainly a book to learn and use Kotlin? (Which is totally cool too!)

Uberto is a very passionate programmer, starting when he created his first video game on the ZxSpectrum many years ago.

I think it can be useful to people using similar languages (Java, C#, Typescript, and so on.)
I don’t know Erlang and Elixir well but I think are too different the code to be translated.
But the general ideas will be the same: TDD, event sourcing, thinking in term of pure functions etc.

I am very interested in this book.
Thanks for your effort Uberto Barbini