Build a Weather Station with Elixir and Nerves (PragProg) 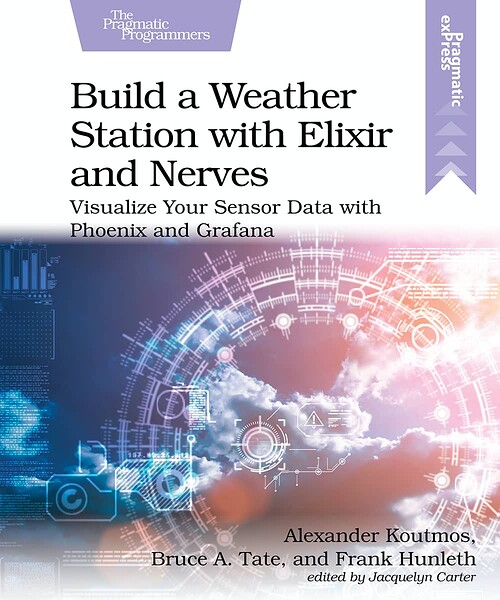 The Elixir programming language has become a go-to tool for creating reliable, fault-tolerant, and robust server-side applications. Thanks to Nerves, those same exact benefits can be realized in embedded applications. This book will teach you how to structure, build, and deploy production grade Nerves applications to network-enabled devices. The weather station sensor hub project that you will be embarking upon will show you how to create a full stack IoT solution in record time. You will build everything from the embedded Nerves device, to the Phoenix backend and even the Grafana time-series data visualizations.

Elixir as a programming language has found its way into many different software domains, largely in part to the rock solid foundation of the Erlang virtual machine. Thanks to the Nerves framework, Elixir has also found success in the world of embedded systems and IoT. Having access to all of the Elixir and OTP constructs such as concurrency, supervision, and immutability makes for a powerful IoT recipe. Find out how to create fault-tolerant, reliable, and robust embedded applications using the Nerves framework.

Build and deploy a production grade weather station sensor hub using Elixir and Nerves, all while leveraging the best practices established by the Nerves community for structuring and organizing Nerves applications. Capture all of your weather station sensor data using Phoenix and Ecto in a lightweight server-side application. Efficiently store and retrieve the time-series weather data collected by your device using TimescaleDB (the Postgres extension for time-series data). Finally, complete the full stack IoT solution by using Grafana to visualize all of your time-series weather station data. Discover how to create software solutions where the underlying technologies and techniques are applicable to all layers of the project.

Take your project from idea to production-ready in record time with Elixir and Nerves.

Alexander Koutmos has been writing software professionally for almost a decade and has been working primarily with Elixir since 2016. He currently maintains a few Elixir libraries on Hex and also runs a software consultancy (www.stagira.com).

Bruce Tate is a kayaker, programmer, and father of two from Chattanooga, Tennessee. The author of more than 10 books has been around Elixir from the beginning. He is the founder of Groxio, a company that trains Elixir developers.

Frank Hunleth is an embedded systems programmer, OSS maintainer, and Nerves core team member. When not in front of a computer, he loves running and spending time with his family.

I am very interested in the topic in this book, haven’t tried Nerves before.

Thanks! Getting Nerves books out has been a long time coming. As someone who’s not a natural author, I can’t express my thanks enough to Alex and Bruce for making this real. I really hope it enables more people to experience some of the joy of using Elixir on embedded systems.

I am sure it will be a great success Frank, and it sounds like you were in great hands with Bruce and Alex. Hopefully we can run a book club on it one day - if you know anyone who might be interested in taking part, feel free to send them my way

Trying to work up the nerves to learn Nerves.

I see what you did there

I need to read this, this is highly relevant to my interests!

I just need to find RPb Zero or two. They seem to be out of stock whenever I try to buy few. And all the ones I have are in active use in different projects.

I was wondering what are the cables? Can’t find any in France.

These are not in France, but you’ll probably get the picture: JST-SH cable - Qwiic / STEMMA QT compatible – Pimoroni

Thanks a lot, the picture helps so much