Which Linux distro do you use on your desktop or dev machine?

You sure about that? 4.x was deprecated something like 13 years ago, that’s horribly ancient…

Manjaro. My “go outside and work in the park” computer is an HP Stream 11, the one with the famously funky touchpad. None of the other distros could control the touchpad, but Manjaro could. QED.

I’m quite sure. Slackware 14.2 is still using KDE 4, and still occasionally provides patches to account for bugs, CVEs, etc. However, I don’t use it myself because I never liked KDE. I stick with FVWM instead.

Lol, it’s amazing anything would be using such an ancient KDE, KDE4 wasn’t even really ‘completed’ as it was a mostly-rewrite of KDE3. KDE5 is where it finished the rewrite and became one of the fastest and lightest DE’s around. Should try KDE5. ^.^

KDE4 might still be in Slackware 14.2, but nobody is obligated to use it. You don’t even have to install it, but that might lead to headaches later on if you try to run scripts from slackbuilds.org that depend on KDE4 (but that’s easily fixed using slackpkg).

Incidentally, I tried KDE5 once on a distro that wasn’t Slackware. I wasn’t impressed. It was too much like Windows for my taste. Old-fashioned window manglers like FVWM and Openbox are more my style.

Incidentally, I tried KDE5 once on a distro that wasn’t Slackware. I wasn’t impressed. It was too much like Windows for my taste. Old-fashioned window manglers like FVWM and Openbox are more my style.

You can actually get KDE5 to look like those, or like a tiling manager, or like gnome, or cinnamon, or unity, or mac, or etc… It’s extremely configureable. And it is constantly benched as one of the fastest and lightest weight DE’s among linux DE’s too. ^.^

But yeah, by default it is very windows-like for familiarity reasons.

And it is constantly benched as one of the fastest and lightest weight DE’s among linux DE’s too. ^.^

Is that really true though? When I last gave up using Linux as a main OS (which was admittedly 8 years ago) KDE was still the most heavyweight between itself, GNOME 2 and XFCE. As I admitted elsewhere my experience is dated but I am curious how much things have changed while I wasn’t looking.

The changeover from KDE4 to KDE5, which was the changeover from QT4 to QT5, brought a lot of performance and memory enhancements, both from the QT changeover (QT5 focused a lot of minimal memory and extreme performance, as they were trying to market to phones and such too), and they pushed hard to outright rewrite a lot of their systems to bring them up to modern standards. In doing so they significantly reduced memory consumption to the bare minimums, made it blazing fast, and even added things like support for other OS’s (it’s possible, though not necessarily easy, to compile just about any KDE app, even the DE itself sans plasma (very linux specific) to Windows for example). They also rewrote their plugin system to focus on native-code plugins rather than scripting languages as well. Everything was focused on making it fast and stable in the early KDE5 versions (specifically because of the issues of KDE4, which was in large part just KDE3 ported to QT4 instead of QT3).

If you were using KDE4 back 8 years ago, or KDE5’s really early versions (which were not always stable or feature complete by any stretch) then it would have seemed not terribly good (KDE4 was heavy, KDE5 back then was not, well, feature complete as mentioned), but about KDE5.08 or so is when it basically became ‘complete’, and versions since have just made it faster, lighter, and adding more features without cost. Even XFCE, which ‘used’ to be regarded as one of the lightest DE’s (though feature lacking it is) is heavier in memory and slower in speed than modern KDE5 (even while using KDE5’s extensive feature set).

You can actually get KDE5 to look like those, or like a tiling manager, or like gnome, or cinnamon, or unity, or mac, or etc… It’s extremely configureable.

I didn’t much care for CDE when I used it in college, and don’t have much use for its successors KDE, GNOME, and XFCE.

I don’t want a computer to hold my hand. That’s my spouse’s privilege.

Another rolling release user here. Arch in my case. Although my very first linux distro was http://puppylinux.com/ back in college, that was really snappy and lightweight (which was really helpful since my hard drive had died).

Although my very first linux distro was http://puppylinux.com/ back in college

…it must be good - it combines two of my favourite things! Dogs, and D&B playing in the demo vid 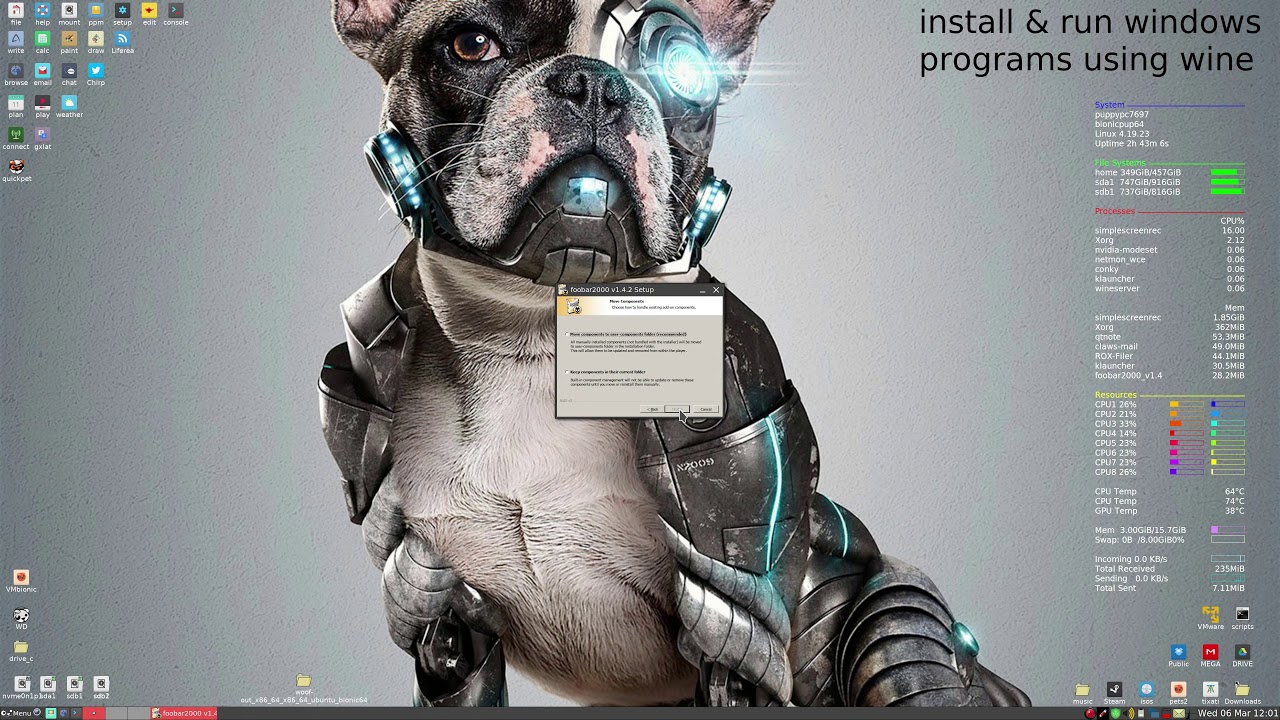 I first dabbled with RedHat 4.x (the one from 1996). It was not easy. Nothing worked and it took ages to fix without Internet (because the modem would never work out of the box). Because I only had one computer I had to boot into Windows to read the documentation, reboot to linux, try a few things, reboot to windows again, etc, etc.

Took all the way to 2005 when I started using Ubuntu until I finally ditched Windows. Have not used it since. Changed to use SuSE for a short period, then into slackware for a couple of years. Then a brief venture into Arch but I have problems with rolling releases (it is always something that breaks). Back to Ubuntu 12 or perhaps 14.04 + i3, which I updated to 16.04 and then 18.04 and now finally had enough of it and went distro hunting again for the first time in many years.

After trying and discarding, Ubuntu 20.04, PopOS!, Regolith and Manjaro (still don’t like rolling releases) I figured I give NixOS a try.

So far NixOS has been outstanding for my use-case. I have a very particular setup and now I can have a configuration.nix file containing my entire configuration they way I like it without having distro’s trying to second guess my preferences. And it is trivial to replicate to other machines! Now I only need to find out how to get NixOS onto my AWS server systems and I will have peace of mind.

I’ve mostly been on Ubuntus, with a stint on Manjaro + i3 because I wanted to give i3 a try. Then I found Regolith and I’ve been very happy. Ideally though, I’d run NixOS + ZFS like @NobbZ but with all the things I love about Regolith. Unfortunately I don’t have the time to fork Regolith to NixOS.

One question I have about Nix is, with packages like Firefox that update frequently, do you set Nix to some stable package and have it upgrade, or do you have to change the version in your config?

I really don’t care for those. Some update really frequent and I bump them manually in my overlay, as I consider it’s compile time negligible.

Though larger things like a Firefox, which also depends on properly updated libraries which could backfire into the system and cause unforeseeable recompilations of the system, I just wait for the channels version beeing updated.

As a relative newbie to running Linux on the desktop Pop has been great for me coming from macOS. The new Gnome 3 tile manager is pretty sweet (although can still be buggy at times) and I love how customizable the whole experience is. Running Docker natively is so nice!

Mint in a VM on my Catalina MBP. Used to sanity check builds rather than actually develop, and needed less and less as Docker has got better on the Mac. Deployed to Docker on Ubuntu 18.

I started with Mandrake several years ago then got stick to SUSE and openSUSE/openSUSE Leap,
The Leap version is what I use daily at my computer, I also experienced some Ubuntu (desktop and server) and Debian (server) while working on other office computers.

I’ve switched back to OpenBSD after about a year of using Slackware because I needed reliable wifi support on Atheros chipsets. (I’ve got powerline ethernet now, so wifi isn’t as important).

I’m only mentioning it here because DevTalk doesn’t have a BSD section (and might not need one if I’m the only BSD user here.)

So is Manjaro better about updates than Arch? I tried arch for a bit, sort of liked it. Ran updates without reading the news, found out that was a crime of some sort, read the news, that fixed some of my problems. Got stuck with a broken GDM and never returned because I couldn’t find enthusiasm for a system where updates can break whatever they like.

I dont begrudge them running it that way I just didn’t want to deal with it. Still don’t i think.

Is that the case with Manjaro or do they pave over the updates better?

Manjaro is Arch with batteries included AND they delay package updates a little to address stability concerns. So updates are slower than Arch but faster than Debian/Ubuntu. Manjaro is also a tighter community, or at least more directed.