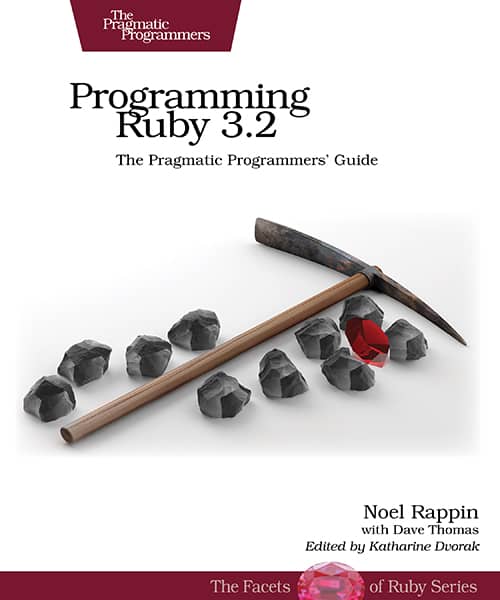 Would you like to go from first idea to working code much, much faster? Do you currently spend more time satisfying the compiler instead of your clients or end users? Are you frustrated with demanding languages that seem to get in your way instead of helping you get the work done? Are you using Rails and want to dig deeper into the underlying Ruby language? If so, then we’ve got a language and book for you!

This comprehensive reference manual for Ruby includes a description of the most important standard library modules, built-in classes, and modules. It also includes all the new and changed syntax and semantics introduced through Ruby 3.2, including pattern matching and Ractors, and describes the language through Ruby 3.2.

Noel Rappin is a Staff Software Engineer at Chime Financial. He is the author of multiple technical books including Rails 5 Test Prescriptions and Modern Front End Development With Rails, and was the host of the Tech Done Right Podcast. Follow Noel on Twitter @noelrap, and online at noelrappin.com.

Dave Thomas is a cornerstone of the Ruby community, and is personally responsible for many of its innovative directions and initiatives. He is one of the founders of the Pragmatic Programmers and the Pragmatic Bookshelf.

Ah that one language that escaped my sight. I’d love to do a book club on this some day, hoping I’d finally do some substantial Ruby through it at least.

I have the previous edition, never had a change to use it professionally but I think Ruby is a really nice language.

Great excellent move for updating this classic book!
Another book of ruby will be The Ruby Programming Language from Oreilly, though I am a bit skceptial if there is a update.

Looks like this’ll be my fifth copy of Programming Ruby.

I don’t need it. The changes are minor enough, and well documented enough, that it’s completely superfluous to my needs. But I’ve gotten so much more than $30 worth of value out of my original purchase that I still feel like compensating them for their work again.

Thanks for reading @MyrddinE, What a delightful comment! If you want to be more involved, we are always looking for tech reviewers. My email is margaret.eldridge@pragprog.com if you’d like to learn more.

This book has been on my waiting list since Noel shared that he was working on it this summer.

I have Manning’s Well Grounded Rubyist but I tend to prefer the PragProg style of book.

Ruby being a great language, sometimes a bit magical, this book can certainly help someone get started learning the language.

Personally, I am very excited to see a book dealing with Ractors and pattern matching.

Thank you for reading @Maartz!

Thank you for supporting our authors!