hello (also known as helloSystem ) is a desktop system for creators with focus on simplicity, elegance, and usability. Its design follows the “Less, but better” philosophy. It is intended as a system for “mere mortals”, welcoming to switchers from the Mac. FreeBSD is used as the core operating system. 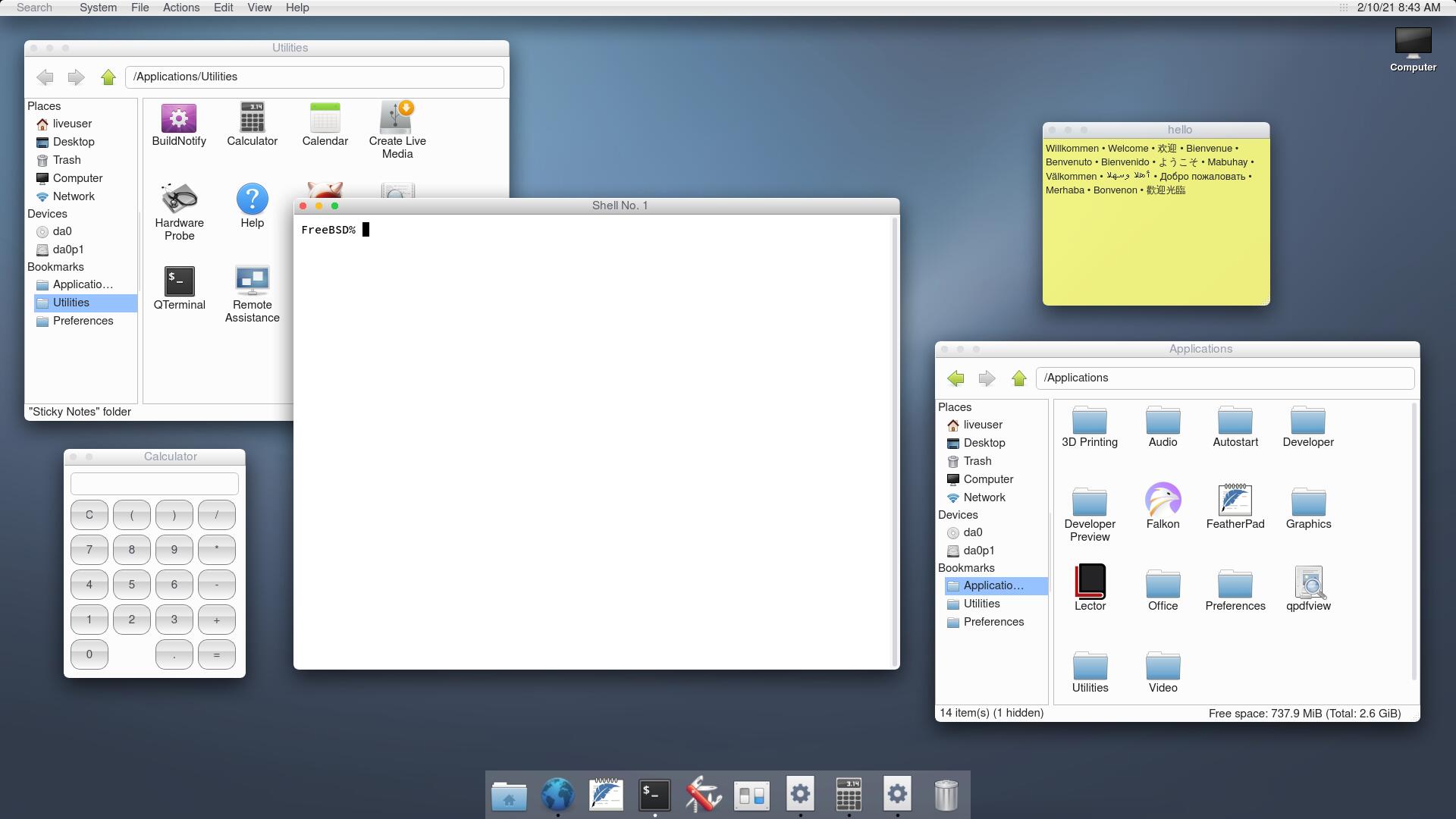 Eh, this is fine but it doesn’t change the glacial pace with which FreeBSD is updated. Although they do make an exception for security fixes – that much is true.

This bit is a bit concerning tho:

As a general rule, everything should be welcoming for Mac users but 10x as simple.

Maybe they should just say ‘to begin with…’

This also implies that Mac software is complex and confusing. Which… is sadly true part of the time.

Mac OSX is just a fork from NetBSD… with Aqua

I think too much time has passed for this to be true anymore. But I might be wrong.

It’s undergone a lot of changes but its roots are in Unix - from Wikipedia:

macOS (/ˌmækoʊˈɛs/;[8] previously Mac OS X and later OS X) is a series of proprietary graphical operating systems developed and marketed by Apple Inc. since 2001. It is the primary operating system for Apple’s Mac computers. Within the market of desktop, laptop and home computers, and by web usage, it is the second most widely used desktop OS, after Microsoft Windows.[9][10]

macOS is the direct successor to the classic Mac OS, the line of Macintosh operating systems with nine releases from 1984 to 1999. macOS adopted the Unix kernel and inherited technologies developed between 1985 and 1997 at NeXT, the company that Apple co-founder Steve Jobs created after leaving Apple in 1985. Releases from Mac OS X 10.5 Leopard[11] and thereafter are UNIX 03 certified.[12] Apple’s mobile operating system, iOS, has been considered a variant of macOS.[13]

The first desktop version, Mac OS X 10.0, was released in March 2001, with its first update, 10.1, arriving later that year. The “X” in Mac OS X and OS X is the Roman numeral for the number 10 and is pronounced as such. The X was a prominent part of the operating system’s brand identity and marketing in its early years, but gradually receded in prominence since the release of Snow Leopard in 2009. Apple began naming its releases after big cats, which lasted until OS X 10.8 Mountain Lion. Since OS X 10.9 Mavericks, releases have been named after locations in California.[14] Apple shortened the name to “OS X” in 2012 and then changed it to “macOS” in 2016, adopting the nomenclature that they were using for their other operating systems, iOS, watchOS, and tvOS. With Big Sur, Apple advanced the macOS major version number for the first time, changing it to 11 for Big Sur from the 10 used for all previous releases.

I think an OS to compete with macOS will either emerge from similar Unix-y path, or something written in a language like Rust.

Somewhat agree but the UNIX legacy started becoming damaging and not useful – in certain aspects at least.

For example, stubbornly clinging to the idea of “everything is a file” has caused a lot of problems with time. It’s time for some new paradigms! Treating everything as a block device and buffered reading is mandatory actually slows down some algorithms that work on modern NVMe drives.

Not to mention the insistence that everything is a text… And 99% of all UNIX and GNU tools expect the pipe operator to pass text.

I mean, all of that has got us really far but I’ve personally seen and experienced that clinging to these old concepts (and implementations) has been damaging.